CryptoNinja spoke up at the AsiaVerse NFT International Meetup, showcase of the hottest NFT projects, in May 28th!

MediaDAO *1 will hold "AsiaVerse NFT International Meetup #7" in collaboration with AsiaVerse, one of Asia's largest Web3 communities, to introduce NFT projects from Asia to overseas audiences.

The seventh installment of the event will feature CryptoNinja, the pioneer of Japanese NFT project. Founder of NinhaDAO,Ikehaya was invited to speak out  that can only be heard here.

Beginning with this time, we are extending the time of one project significantly. By listening to more detailed and in-depth talks, we were able to get even closer to the essence of the projects.
As  usual, English interpreter was also present to bring information to NFT collectors and investors in English-speaking countries.

Voxels, the metaverse platform where the exhibition will be held, is relatively easy for beginners to use, as they can enter without connecting a crypto asset wallet. We hope you will take this opportunity to experience NFT art.

Ikehaya from CryptoNinja, a pioneer of Japan NFTs.

We were able to listen to valuable talks about the community management "CryptoNinja," future development, and other topics that are usually difficult to hear about. In addition, questions was solicited in advance via MediaDAO's official Twitter feed from both Japan and overseas, and was answered on the spot.

CryptoNinja appeared in September 2021 as soon as NFT became a hot topic in Japan. It is a Japan-based NFT project created by founder/marketer Ikehaya and creator Rii2.

The characters of the Web3 era, which "everyone can participate in and develop" rather than just buying them, can be monetized through secondary creation,
the ninjas have attractive characterizations, and there is room for creation where fans can create their own stories, making secondary creation fun for fans.

The various events derived from NinjaDAO, an active community that upholds "A place where everyone can play a leading role," also keep fans entertained and are always a topic of conversation, especially on social networking sites.

The rarity of 31 items in just 8 months since launch is one of the reasons for the popularity of this NFT project, which is the pride of Japan, with volume trade of 187 ETH and floor price of 29 ETH (as of May 26, 2022) on Opensea.

In addition, CryptoNinja Partners, a spin-off NFT project generated from NinjaDAO, released 22,222 units on May 15 and sold out in less than an hour and a half. The momentum of the secondary distribution, which also involved overseas players, continued to grow and rewrite the history of the Japanese NFT world.

Please refer to "NFT NEWS Japan.", a web media operated by MediaDAO, for more information on these rapid advances.
https://nft-news-japan.jp/nft-collection/3403/

The architectural beauty of the new AsiaVerse NFT Hall is another highlight.

The exhibition venue, "AsiaVerse NFT Hall," has just completed reconstruction and renewal on May 22. Please enjoy the time to experience NFT art in this clear, all-glass space with a sense of continuity between the interior and exterior.

On the official MediaDAO YouTube channel, you can watch the reconstruction of the "AsiaVerse NFT Hall" as well as digests of past events.

*1 What is "MediaDAO"?
A community with the mission of "moving the needle of the times forward quickly," it operates the Web3 media "NFT NEWS Japan." and plans and manages various events and NFT projects. In addition, in cooperation with AsiaVerse, one of Asia's largest Web3 communities, the NFT Hall was constructed within the Metaverse space. It holds events to introduce a wide range of NFT works from Asian countries.

*2 What is "Voxels (Cryptovoxels)"?
One of the 3D virtual spaces (metaverse) utilizing blockchain tokens (NFT). Users can explore the area with their avatars and communicate with other users. In addition to shopping and art appreciation, a variety of events are held, with live music concerts being one of the most popular.

*3 What is “AsiaVerse NFT Hall”?
The NFT International Exhibition Hall opened in January 2022 in the Cryptovoxels metaverse. Japan and other Asian countries have set up their own exhibition areas, attracting the attention of NFT collectors from all over the world. Located in the most visited area of the platform, it has welcomed thousands of visitors since its opening. The building will be rebuilt on May 22, 2022. The current building was designed by the second generation of the building's master builder, Mr. Kurokazu. 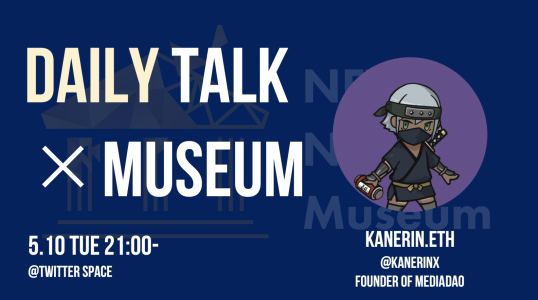